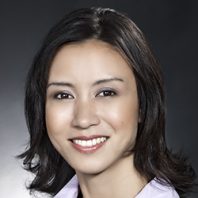 Ms Saw has a wonderfully calming personality. She took time to explain the procedure and answered all my questions thoroughly. She communicated clearly during the operation, which alleviated a potentially very stressful situation. ...Read more

Ms Valerie Saw features as one of the best laser eye surgeons in the UK, the only female to make it. Recognised by her peers for her expertise and experience, she is an Examiner and Committee Member for the Royal College of Ophthalmologists’ Certification in Laser Refractive Surgery.

She did her medical training at the University of Sydney, where she received the University Medal for coming first place on the Honours list. She has been trained at the highest level in complex corneal and cataract surgery, having spent 4 years in advanced specialisation at Moorfields Eye Hospital. Due to her experience she is able to offer a choice of treatments and customise these to the patient’s individual situation.

Being expert in managing medical conditions of the front of the eye like blepharitis, dry eye and contact lens problems means that Ms Saw is able to optimise the condition of the eyes for an excellent result in laser surgery, and also in cataract and implant surgery.

Ms Saw is a longstanding Council Member of the British Society of Refractive Surgery (BSRS) and a member of the American, European and UK and Ireland Societies of Refractive Surgery (ASCRS, ESCRS, UKISCRS) and the European Corneal Society (EuCornea). She is a member of International Sjogren’s Syndrome Registry Review Panel (SICCA) and medical advisor for the Dry Eyes Medical website. She is a regular invited speaker at conferences and teaching courses both in the UK and abroad.

Ms Saw’s PhD thesis on ocular surface scarring was awarded the Research Medal at Moorfields Eye Hospital and an Association for Research in Vision and Ophthalmology (ARVO) Travel Grant. This work has led to ongoing research and potential new treatment for patients.

Ms Saw has been performing eye surgery for over 10 years and specialises in:

Ms Saw no longer treats patients at Moorfields Private, and her private practice has moved to Harley Street.

Valerie was highly professional and very competent indeed and the Lasik surgery on my left eye went really well. The procedure was explained very clearly in advance and the procedure itself was quick and painless and has resulted in clear long distance vision in the eye. The surgery took place while Valerie was at Moorfields Hospital and the post procedure check up took place at Focus Clinics. It all went very well and I can strongly recommend Valerie.

Very satisfied with my treatment. Ms Saw is excellent and the quality of aftercare is fantastic. I would highly recommend treatment here and I am delighted with the results.

I found Valerie very informative prior to having my eye implants, th after care was first class. I would not hesitate to recommend Valerie to any of my friends who were thinking of having this procedure.

The treatment was completely successful. Credit to be able to drive without glasses and to buy sunglasses without having to get expensive lenses. Wish I’d done it sooner, best money I’ve ever spent!

Extremely pleased with the results from my laser eye surgery with Ms Saw. Perfect vision, better than 20:20. Still marvelling at the view 4 months on.

Ms Valerie Saw first conducted my consultation in November of 2014. After running through a number of pre-consultation tests, which essentially consisted of a conversation and eye sight/health checks with Ms Saw’s own team, I was invited to talk to Ms Saw herself. The session was mostly about understanding the eligibility of eye surgery, from the type of surgery to all risks it carried. By the end, I felt sure I knew what I was entering into.

As the consultation was valid for one year, I was allowed to head off and think about whether I wanted the surgery. On the day of my treatment, I was guided through the correct department, promptly taken through all my checks, and reassured by hospital staff. Even though there are other patients waiting outside, I never once felt rushed.

During the surgery, Ms Saw explained the progress the laser was making, and kept me calm even when the machine cut off after I had moved my eye from the laser. After the surgery, I had a number of aftercare options explained to me, along with how I should be using the medical drops (all provided in the overall surgery cost), and given Ms Saw’s personal card in case of any emergencies.

I had three appointments with Ms Saw after the surgery, one of which was an emergency – though I was scheduled in on the day I called with no problems. I was recommended further drops where I needed them and advised on the best aftercare moving forward. I was also told after the end of my scheduled appointments to contact Ms Saw if the need ever arose.

I would highly recommend having the surgery with Valerie Saw, who is calm in speech and professional in approach, essential qualities when dealing with patients looking to make important decisions on issues as sensitive as their sight.

The service provided by Valerie and her team was fantastic and I am very pleased with the results. I would not hesitate to recommend her to any of my friends or family.

Ms Valerie Saw’s team were very attentive and helpful. I had LASEK which has a longer recovery time and is more painful. Ms Saw ensured the pain has kept to a minimum and even came in on a Saturday to check how my eyes were healing! All of my questions were answered promptly

I had spent a lot of time researching LASIK surgery as it was something that I was fearful of having done, even though I really wanted to improve my sight. I could not have chosen a better surgeon than Valerie Saw. Not only did she keep me fully reassured and informed at all time, her manner and personality left me feeling instantly at ease in her care. The treatment itself was not as scary as I had anticipated and either Valerie or her team were always at the other end of the phone if I needed assistance with aftercare. It has been one of the best decisions I have made and I am so pleased that I chose Valerie for my treatment.

Well taken care of. Surgery went very well and aftercare excellent. I have 20/20 vision, the best thing I have ever spent my money on. Would recommend LASIK eye surgery.