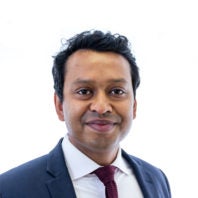 My eyes used to be very different, my right eyesight was good but objects in my left eye were fuzzy and distant. As I grew older I wore varifocals for my computing job and distance glasses for driving, this was OK, but not really ...Read more

I have recently had lens replacement surgery and after wearing glasses for 33 years, latterly varifocals, I no longer need them. Eye surgery was a scary prospect but from first to last, Mr Angunawela was open, straightforward and reassuring. The surgery itself was painless and the care I received at Moorfields was efficient and friendly. I have had very little (and very minor) discomfort during the process or since and wish I had had it done when I was younger.

Delighted with the result of my ops.

If you’re considering of having this treatment at Moorfields, don’t think twice!